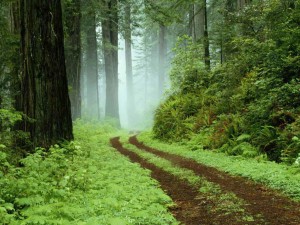 The results of our Unplug & Reconnect Labor Day contest are in . . . and the winners are Patrick Ross of Virginia (first place) and Lori Quiller of Alabama (second place).

Patrick escaped to the dense forest of Shenandoah National Park, where he took in the wonders of nature and occasionally found himself bemused by the plugged-in antics of his family members and technology-addicted fellow campers. You can read Patrick’s essay soon.

Meanwhile, our second-place winner, Lori, described the cacophony of street sounds she finally heard, like music to her ears, once she put away her iPod. Lori even managed to avoid a loose manhole cover she might not have noticed while plugged into her iPod! Her essay will also appear here later in the week.

Patrick and Lori each won their choice of a Lo-Tech Survival Kit as their prize. Patrick, a part-time journalist and MFA student, chose our “Family Fun Night” gift choice, which includes dinner for four, four board games, and a dessert-making kit. Lori, who recently became unemployed, plans to treat her parents to a “Family Fun Night” as a way of thanking them for their support.

A third winner, Bracha Hammer Finman of Far Rockaway, NY, an occupational therapy consultant, also won a Lo-Tech Survival Kit in our raffle for all contest entrants, including those who liked Unplug & Reconnect on Facebook or followed us on Twitter. She will receive a  getaway package that includes a $200 Jet Blue gift certificate and a carry-on travel bag.

Making an escape to nature was a popular way to unplug for many of our contestants.

Amber, of Brooklyn, N.Y., described how she and her family fled technology by camping out in an Alaskan barn this summer. Out in the wilderness, she forgot about email as she considered more important things, like close encounters with bears (not to worry; Amber’s mom, a bear-attack veteran – knows just what to do!)

Visiting his “river sanctuary” in Iowa, Mike Wilson was reminded that despite the advances of civilization, he is still a “human animal” touched by the “primal feel of sun, water and wind.”

The contest elicited a poem from Ana Espinal, who observed:

“As I sat in a crowded restaurant with my food and my Nook,/

Who needs to socialize when one has this, that and Facebook?”

Many of our contestants, forced to unplug by power outages wrought by Hurricane Irene found to their surprise that they enjoyed the brief respite from technology. They lit candles at the dinner table, went on nature walks, and played board games with their families for the first time in years.

Thanks to everyone who participated in our contest. We hope you found the experience of unplugging and writing about it as rewarding as we did. Be sure to check back next week to read the winning essays!