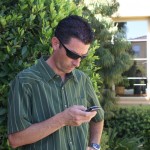 The decision to ban texting was not a spontaneous one, but rather a legislative reaction to a string of three fatal accidents, all involving pedestrians who were texting while walking.

While some Fort Lee residents are upset with the ban, we think it’s a good way to highlight the dangers of texting while walking – or driving, for that matter.

The ABC News story points to a study by Stony Brook University in New York, which found that texters are 60 percent more likely to veer off course than non-texters, because the act of texting alters their gait when walking. The study also showed that texting interferes with memory.

“We want to raise awareness that a real disruption occurs because of texting,” Eric Lamberg, co-author of the study, told ABC News. “Texting disrupts your ability much more than does talking.”